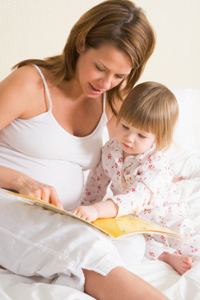 It seems like every week the results of a new study are announced that further support the idea that a baby in the womb is capable of much more than ever thought possible. The long-held notion that we bring a baby home from the hospital has become obsolete. Recent research has helped us to understand the amazing fact that a baby in the last trimester is an active and responsive member of the household, someone who hears, learns, and remembers what she is exposed to in the womb. Think about what this means! Your baby is already familiar with her sibling’s laugh, the sound of your dog barking, the musical theme to your favorite news show, and most importantly, the melody and cadence of your voice.

Some of the research strongly suggests that a baby is soothed and calmed by a rhythmic and repetitious story or music because the inherent beat closely mimics the rhythm of his mother’s heartbeat and breath. It makes sense, doesn’t it? A baby in the womb is cozy, warm, and comforted by the “ba-bump, ba-bump, ba-bump, ba-bump” of your heartbeat, and the in-and-out “whoosh” of your breathing. If you read a rhythmic story, he will also be soothed by the rhythm of your voice. Once born, the baby is taken out of this soothing environment with its predictable, rhythmic sound. But if you hold your baby close and read a rhythmic poem or story that you read to him regularly during the last trimester, he will immediately be soothed by the familiar ba-bump beat.

Here’s an example of a fun poem by Shel Silverstein. As you read it, notice its distinct four-beat rhythm, “ba-bump, ba-bump, ba-bump, ba-bump.” Of course, the baby in the womb won’t yet be able to understand the humor and cleverness of the poem (though you will!). But she will become accustomed to the sound of the words and the repeated rhythms. When your baby is born and you read the familiar poem, you will be amazed to see that she becomes instantly relaxed—a rapt and peaceful audience. You know the feeling: Think of when you’ve searched the radio for a good station. When you catch the beginning of one of your favorite songs you just sit back, listen, and let it take you away.

There’s a Polar Bear
In our Frigidaire—
He likes it ’cause it’s cold in there.
With his seat in the meat
And his face in the fish
And his big hairy paws
In the buttery dish,
He’s nibbling the noodles,
He’s munching the rice,
He’s slurping the soda,
He’s licking the ice.
And he lets out a roar
If you open the door.
And it gives me a scare
To know he’s in there—
That Polary Bear
In our Fridgitydaire.

4 thoughts on “The magic of rhythm”

The Belly Books collection is now brought to you by Cottage Door Press! 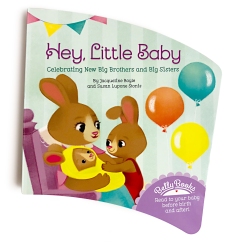