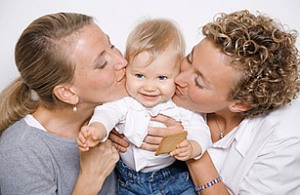 Although the majority of babies are still raised in a traditional mother/father household, we know there are many strong families that represent unique variations on the parenting theme. Lots of homes include extended family members who are heavily involved in raising the child. A single parent might be helped out by a best friend or roommate. More and more kids are raised by two mommies or two daddies, perhaps with a surrogate mother. And siblings can contribute substantially to the care of baby brothers and sisters.

With the agreement of the expectant mother, anyone who intends to take a large part in caring for the coming baby can also begin reading to it before it’s born. He or she can start the bonding process early and, after the birth, experience the newborn’s response to the familiar voice and story. This will help soothe both baby and grownup when they spend time together without the birth mother, whose voice would naturally be best known to the baby. 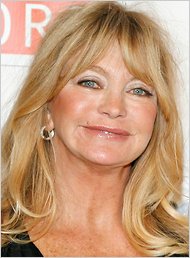 Probably the most notable co-caregivers today are grandparents, and especially grandmothers. It’s cool to be a grandma now! When Goldie Hawn first became a grandmother, she balked at the title because “It’s a word that has so many connotations of old age and decrepitude.” Her son gave her the nickname Glam-ma and it stuck—and became a fashionable term. The phenomenon of grandbaby showers is becoming widespread, as a way of honoring the initiation into grandparenthood and, more practically, to help prospective grandparents prepare their homes for the visiting baby and even for childcare.

Substantial childcare on the part of grandparents has become a fact of life under the present economic conditions that force so many parents to work fulltime. A University of Toronto study found that close to 7% of all American grandparents provide extensive caregiving—of 30 or more hours a week—while not being the primary caregivers. According to the Pew Research Center, 1 in 10 children in the U.S. now lives with a grandparent, and in 41% of these households the grandparent is the primary caregiver.

So, go ahead, Nana and Pop-pop! Start snuggling up with your daughter(/in-law) and reading a rhythmic story, maybe something comical or that gives you the warm-fuzzies. Billy Crystal wrote his well-known I Already Know I Love You, addressed to his coming grandchild, when his daughter was expecting. This poem of loving anticipation might appeal to any prospective grandfather. Anne Bowen’s I Loved You Before You Were Born is told from the grandmother’s perspective, as is Karen Hill’s Grandmother’s Book of Promises. Or choose your favorite poetry—anything rhythmic, with or without rhyme, that adds to your joy in this experience.

Stay tuned for part 2, where we discuss Savvy Aunties of all kinds, baby’s big brother or sister, and other caregivers who go beyond the traditional family.

3 thoughts on “Beyond the Traditional Family, Part 1”

The Belly Books collection is now brought to you by Cottage Door Press!