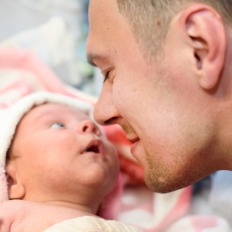 We stand corrected! A July 2016 article on BBC.com, Babies Start Learning Even Before They Are Born, presents a roundup of recent research findings that demonstrate the causes and effects of prenatal learning, including among different animal species. We’re always excited to read about new studies in this area, and we’re delighted to find that our February 2014 post, It’s Only Natural, contains an inaccuracy:

A very important quality that separates mammals from other creatures is our strong desire to protect and care for our young. Unlike a turtle, who lays her eggs in the sand, leaving the tiny baby turtles to return to the sea and fend for themselves alone, we mammals form a bond with our young — even before they are born — that continues for our whole lives.

We go on to tell the heartwarming story of Bella, a pregnant dolphin who whistled to her baby before and after birth, establishing not only a mother–baby bond but also a vocal signal that would be crucial to the newborn’s survival. Well, according to the BBC article, this beautiful instinct is not only a characteristic of mammals. Mother birds of various species have actually been found to communicate with their chicks still in the egg in just the same way Bella did! And fish, frogs, and salamanders have demonstrated in-egg learning too. Whether it’s telling baby animals what their mother sounds like or what their predators smell like, prenatal learning is clearly fundamental to much of the animal kingdom.

It’s now broadly acknowledged that a human baby is sensing the world from inside the womb, through sound, touch, and hormone transfer, for example. The BBC article begins by discussing how food flavors are passed from mother to baby, which is another survival mechanism shared by many animals. The discussion naturally turns to that most compelling learning capacity of all: prenatal language development. In the last trimester, babies’ ears have developed enough that they can hear, recognize, and remember sounds — especially speech sounds, and especially their own mother’s speech sounds.

The article describes some of the research we’ve mentioned in which newborns’ preferences are found to be the result of their experience before birth, so that, for instance, they prefer their mother’s voice and recognize sounds typical of their parents’ language(s) over those they weren’t exposed to in utero. Really, it’s only a variation on Bella’s natural wisdom, as well as her innate urge to bond with her little one. As with dolphins and so many animals, human family and social bonding is part of our intricate survival system, in which language plays a central role. It’s no wonder we start learning the fundamentals of language well before we’re born. As the BBC article concludes, “Science is revealing that what we learn before entering the world may give us more of a head start than once thought.” 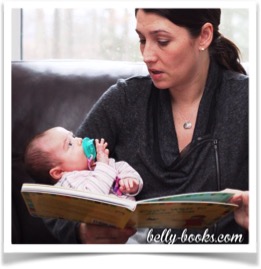 A March 2016 article on PRI.com, Our Ability to Speak Doesn’t Begin with Our First Words. It Begins in the Womb, focuses on this, our favorite subject. It describes a 2015 Finnish study and current Canadian research that again have explored the effects of native versus nonnative speech sounds on newborns, and the implications for prenatal learning. The article quotes researcher Janet Werker of the University of British Columbia: “A lot of language crosses the uterine wall, and so by the time the baby is born, it’s not an inexperienced listener.”

Echoing the “head start on learning language” theme of the BBC article, this one goes a step further by describing the benefits to parents of understanding that, in Werker’s words, “their baby is interested in the world around them, and is interested in learning from the first moments of life. . . . And we like to think that this might make them treat their babies as the curious, involved little beings that they are.”

We couldn’t agree more! Even if expectant parents feel like they have to take it on faith that their little one is hearing and responding to their voices before birth, we know this will become common knowledge in due time, fueled by scientific findings like these and by mounting anecdotal evidence from new parents. We love the concluding words of the PRI article: “Doing well in the world starts with doing well in the womb. So you should talk to the baby bumps. . . . They will thank you later — in the words they learn from you.”

Yes! Talk, sing, and read to your bump. What better way to make this loving, nurturing connection with your baby in the womb than with a bedtime story? A rhyming and rhythmic story, read in your voice every night, will become as familiar to him as a dolphin’s whistle or a nesting wren’s warble — and will be just as comforting and reassu 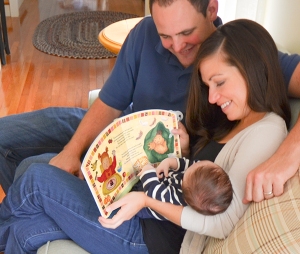 ring to him after he’s born. Your own innate, natural instinct to communicate and bond with your baby can be reinforced by establishing a routine centered around language, right from the beginning. Your voice, plus a beautiful book, are all you need for a natural language bond.

And if reading aloud to an unseen audience doesn’t quite feel natural to you yet, just choose a book that makes you happy, whose colorful illustrations stimulate your feel-good hormones, and whose words help you to make a deep connection with your child. The combination of the engaging language and your familiar, loving voice will enhance the bond between you and your little one. By creating a relationship grounded in caring dialogue, you will naturally foster your child’s amazing drive to explore, understand, and communicate with his world. 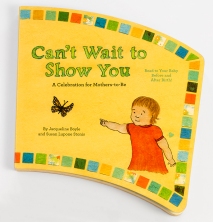 The very best book for the purpose, we just have to say, is our own Can’t Wait to Show You: A Celebration for Mothers-to-Be. It’s not only rhythmic and rhyming, not only beautiful, but even shaped to snuggle around that “curious, involved little being” curled up inside you, listening raptly, learning avidly, and loving already. 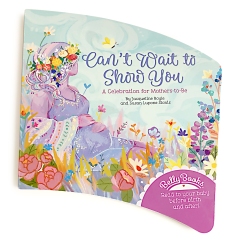 Check us out on Shepherd’s list of Best Books to Read to Your Baby in Utero!

Brought to you by Cottage Door Press, all about early literacy!